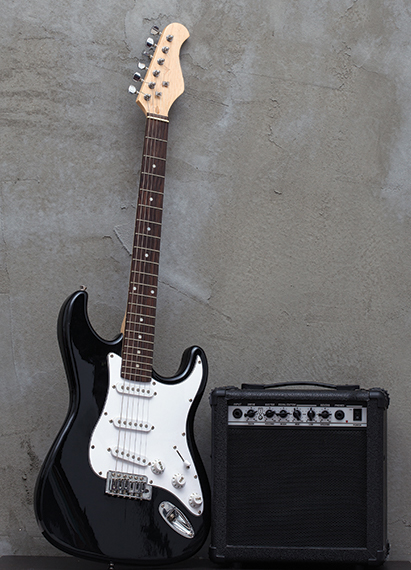 The last few months, we’ve been talking about the standard role of instruments in the contemporary worship ensemble. So far we’ve covered acoustic guitar, bass guitar, and drums. This month, let’s talk about the electric guitar. Depending on the repertoire or style of worship being covered, certain churches may or may not feature this instrument. The electric guitar is sometimes misunderstood by worship leaders, music directors, and even the person playing the instrument. Here are some things for electric guitar players and music directors to keep in mind.

Don’t play the same thing as the acoustic guitar. This goes for both rhythm and note selection. When the electric guitar plays the same thing as the acoustic, this makes the band sound very clumsy and often gets in the way of vocalists and the rest of the group. Instead, the electric guitarist should try to play a part that is less active rhythmically and voiced in a higher register. The acoustic guitar takes the role of playing busy rhythms in the lower register, so electric should be doing the opposite. Try strumming sustained chords or arpeggios in upper positions in a way that fills out the sound and compliments the other instruments and singers.

Less is more. Ninety percent of the time, electric guitarists are playing too many notes at too high of a volume for contemporary worship. The current sound for this style usually involves something more subdued than other electric guitar styles such as rock, country, or blues. This brings us to the next point:

Listen to recordings and learn what the electric guitar player did with the original version of the song. The folks that record parts on popular worship recordings are often good players capable of playing much more technical parts than they record, but they choose not to. This is because overdone parts that are too loud, too busy, or too over-the-top often don’t compliment the song and the vocal melody.

Learn to play chord voicings in every key. Unfortunately, you don’t have it as easy as the acoustic guitar players do. Though using a capo to play in alternate keys on acoustic sounds good and is a correct part of the style, but playing with a capo usually does not sound as good on electric. It is best to just learn all of your bar chords and use fragments of them on the upper strings when composing or improvising a lead guitar part. Capos tend to cause tuning issues with electric, and remove the opportunity to play interesting harmonic decorations by locking you into one place.

As with any musical endeavor, it is never a bad idea to take lessons from a qualified instructor, especially if you are interested in stretching our ability to be creative with the instrument — which is where electric guitar shines. If this is possible in your area, I would encourage you to take it on.