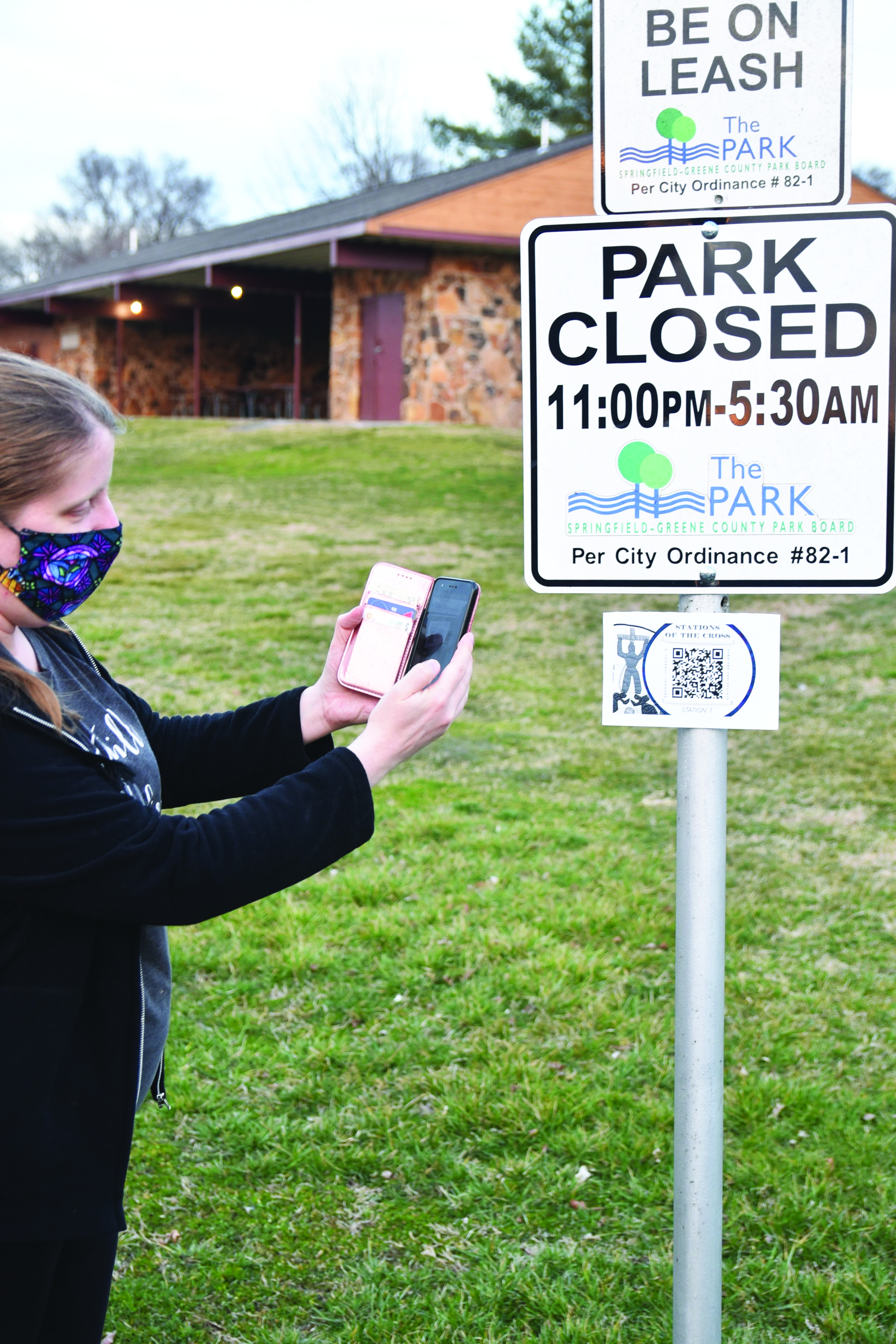 The Stations of the Cross is a spiritual practice that facilitates a way for people to move from place to place, reading the scripture relating to Jesus’s days leading up to the crucifixion, and prayerfully reflect on his experience. But as with all scripture, it can also be a time to apply those words written 2,000 years ago to the experiences of the world we live in today.

Rev. Erika Gravely of Asbury United Methodist Church in Springfield had seen Lutheran pastor Rev. Nadia Bolz-Weber do this using news photos from the aftermath of the earthquake in Haiti and found it inspirational. Gravely considered how something similar could be localized in any context and developed a Stations of the Cross around events in Springfield that could be used as a Bible study.

This year she’s sharing her Springfield version of Stations of the Cross with the community.

“This isn’t just for Asbury or just for United Methodists,” she said. “It will be there as long as the signs stay up.”

She has put up cards at eight stations around Springfield, and each card has a scannable QR code that links to a webpage with the scripture, an audio file that puts the location in context with the scripture, “Digging Deeper” discussion questions, a link to more information about what happened or is happening at the location of the station, a prayer, a question to ponder on the journey to the next station, and a map to the next station. Some of the modern events are from 100 years ago, and some are relating to events within the past year, or that are on-going.

Traditionally there are 14 Stations of the Cross that draw on scriptures from each of the four gospels. Gravely’s version is eight stations, with all of the scriptures coming from the 18th and 19th chapters of the Gospel of John. It begins with Jesus and the disciples in the garden and Jesus’s time of separation. The station is located in Silver Springs Park, one of 10 historic parks in Springfield, and the only park that was open to people of color during segregation.

The second station is located at the police station. The scripture deals with Jesus’s arrest. The website for the station links to the page with the current inmate population of the Greene County jail with their photos, and the reflection called on people on the stations’ journey to reflect upon being arrested, ideas of guilt and imprisonment, and what the police are confronted with in doing their jobs.

It included a link to a news story about a Springfield officer who was severely injured last year when he was intentionally rammed with a car at the police station. Other stations relate to issues that include drug abuse, domestic violence, racial violence and homelessness.

The sites could be done once a week, as a Bible-study experience, or all at once, as a more immersive Stations of the Cross experience.

In the midst of the heavy issues the stations address, a hidden station is a sign that says “You are beautiful.” It’s based around the story of Veronica wiping Jesus’s face, a Christian legend that isn’t scriptural.

“The sign is intended to be spiritually refreshing, a reminder that God appreciates you doing this. You are loved and you can make a difference,” Gravely said.

Although the experience was designed pre-COVID, it is COVID-proof: It is outdoors can be done in complete isolation at any time. People who don’t have smartphones can print off the station guides from the church’s website or pick up a printed guide at the church. Gravely sent press releases in early March in hopes that people would make it part of their Lenten or Holy Week spiritual practices.

“We can tend to rush from Palm Sunday to Easter, without a physical awareness of what Jesus went through and how he handled it with grace and dignity,” Gravely said.

Gravely believes a similar Stations of the Cross could be adapted at any church, in any setting.

“You could do it as a bike tour, or have stations out in the woods, or at different churches … there are limitless possibilities,” she said.

For more on Asbury's Stations of the Cross go to https://asburyunitedmethodist.org/stations/.
News