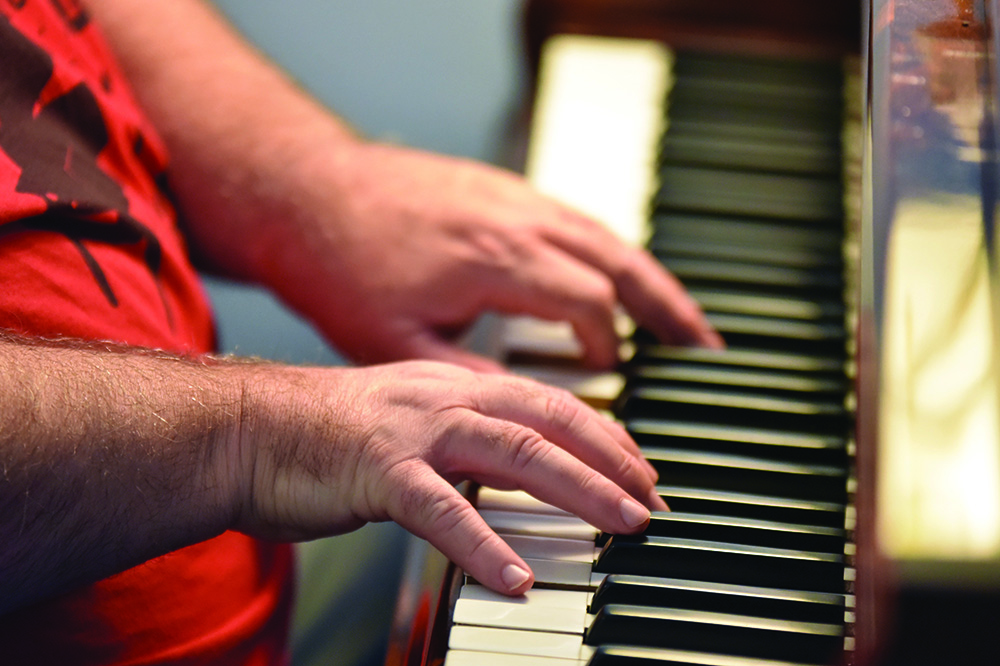 When you see the object of Rev. Jim West’s affection, you may assume it’s her beauty that drew him to her. You would be wrong – it’s what she has inside that means the most to him.

“She plays better than any piano I’ve ever played on,” West said.

The Kranich and Bach grand piano in its Brazilian Rosewood case takes up the lion’s share of real estate in the living room of the West’s home in Columbia. The 118-year old piano plays like new, which is expected, as it is largely new in places where new is important and staunchly original in places where 1901 craftsmanship reigns supreme.

West was first introduced to piano playing at age five when his parents bought a used Studio upright and started him on lessons. They told him if he learned to play they would get him a better piano.

“I am not sure what it means that I kept that same piano for the next 50 years of my life,” he said.

West took to the piano, if not to the piano music. For years he faked being able to sight-read music and got by playing by ear.

“She (the piano teacher) would play a song, then I would play it,” he said.

Finally he was found out, and he did learn to read music, but he still doesn’t consider himself a very good sight-reader.

West grew up in Jonesboro, Arkansas, and enjoyed being able to accompany the high school choir with his piano playing. In college he was a music education major. He loved music, not so much education.

“Teaching music to middle schoolers would be my version of hell,” he said.

West continued on to seminary at Saint Paul School of Theology. He served the United Methodist Church for more than 40 years. Usually the church already had a piano player, but sometimes he would play during a Wednesday night meeting or something of that nature. He often played at Annual Conference Session; before his wife Brenda was appointed as District Superintendent.

“After that I was first lady of the district, and people stopped asking me to do things,” he said.

That original starter piano made some moves with its itinerant pastor, but in 2001 West found his soulmate.

When West was serving Marvin Park United Methodist Church, his wife Brenda would drop him off there on her way to work. That made for some 12-hour days at the church. West wandered across the street to a piano store owned by Julius Konopka. There he spotted a gorgeous rosewood Kranich & Bach grand piano. It was next to an ebony Steinway, and both had nicely restored cases. He played them both that day for a few minutes, and was much happier with the touch and sound of the Kranich & Bach than the Steinway, which had a much firmer touch.

He wasn’t in a financial position to be grand piano shopping, and he said as much to the shop owner hat first day. Konopka told him to please come over and play them anytime. The pianos needed not sit in silence, and if other customers were there, the more the better.

West played every grand piano on that showroom floor but kept going back to that Kranich & Bach.

“It was definitely my favorite piano to play, and while you don't choose a piano for the case, it was also the most beautiful piano I had ever seen,” he said.

Konopka was always happy to see West and said his playing sold pianos. This arrangement went on for several months. Then one day Konopka warned him that someone else had been eyeing “his” piano, and it might get sold out from under him. He wanted West to have it, offered it to him at a 25 percent discount and gave him $700 for his old Apollo upright.

“It was a deal too good to pass up,” West said.

Within a week that piano was installed and tuned in the West’s living room. The piano was originally purchased in 1901 for a 10-year-old girl in New York City, and it stayed in that Park Avenue apartment for 70 years. Someone in Clayton, Missouri, purchased it then. When that person died in 1999, it was purchased by Konopka for resale. And from him, to West.

It served West well for many years, but time was starting to take its toll. The pin block which holds the tuning pins had begun to lose its ability to hold the pins tight, so it needed to be replaced.

One of the preeminent piano restoration companies in the world is the Lindeblad firm in New Jersey. They are a fourth-generation family business, and West chose them to perform a full restoration of his piano. The rosewood case, the cast iron harp and the sound board would remain original, but everything else would get a modern makeover.

The piano was picked up in August 2018. It was the first time since he was a young child that West didn’t have a piano in his home. He did still have a harpsichord and a pump organ at home that he could play, and he was playing a piano at church.

It should have been a few days later when West was experiencing the joy of resurrection instead of the darkness of Maundy Thursday. The piano restoration exceeded expectations.

It was not an inexpensive process, but the piano, now restored, should live and sing beautifully for another 70 years.

“If I get to play it another 15 years, I will have reached the biblically referenced fourscore years,” West said. “But my son is a pianist and loves the piano nearly as much as I do. He rarely comes to the house and he fails to sit down and play something. I know he will treasure the piano all the rest of his life and can hopefully pass it on to one of my four grandchildren.”

Editor’s Note: This story was largely pulled from posts West made to his Facebook page, with a follow-up interview for clarity and to put it in context for this publication. Also of note is that although West’s passion for pianos and piano playing is striking, while talking pianos the conversation often veered back toward his wife Brenda, how much she means to him and what an outstanding job she did as pastor and district superintendent, showing where his heart truly lies.