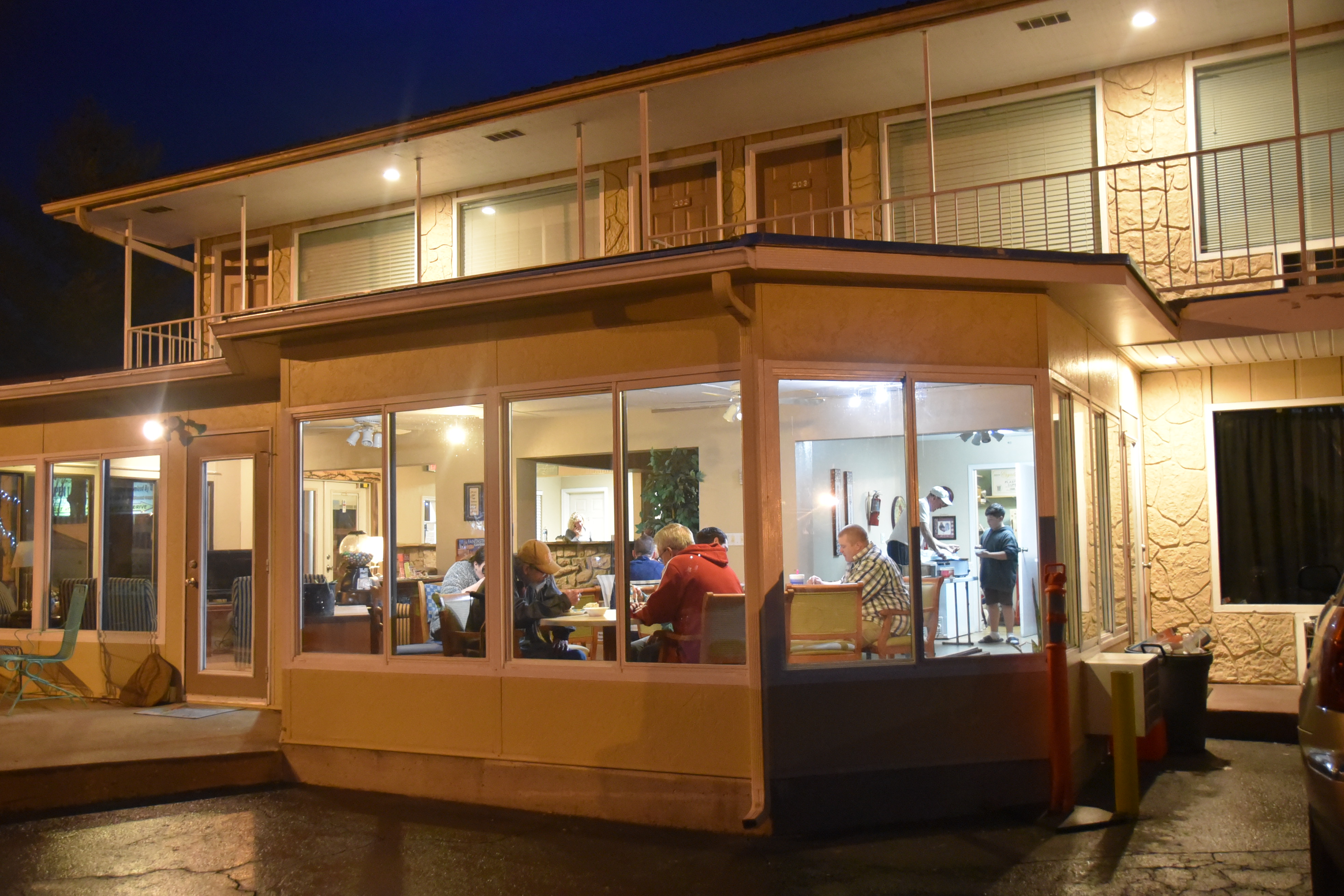 A few years ago, the caring Ministries Sunday School class, prayed for a new opportunity. Egbert came back to the class the following week with a burden on her heart: they should be in ministry to the people living in extended-stay motels. One person in the class sat back in his chair, daunted by her proclamation.

“I’m not sure I’m comfortable with those motel people,” he said.

Comfort level aside, they moved forward. They started going to the Travel Inn. They didn’t have a room to meet in, so they met outside. Eventually, the Travel Inn gave them access to a former laundry room. It didn’t have heat or air conditioning, but at least it was out of the weather.

When the ministry started, it was three women making food in their homes, serving about 10 people. The ministry has now grown from being a Sunday school project to a church-wide effort, with teams making meals in the church kitchen. The original nay-sayer “did a complete 180” and is now a leader in the ministry.

“You couldn’t keep him from coming to help these people,” Egbert said. The purpose of the motel ministry from the beginning has been to build relationships with this often invisible segment of society and to share the love of Christ.

Egbert is from Iowa, she used to take family vacations to Branson in the 1980s to 1990s. After her children grew up she and her husband went back a few times and decided to buy a small retirement home there.

“All of those times we were here I never saw the poverty,” she says.

The church served at the Travel Inn for 3 ½ years, until the health department shut down the hotel and two other hotels in January.

“We knew they should close it, but it left a lot of people with nowhere to go,” Egbert said.

At the time that the Travel Inn closed, they had 40 – 50 people coming on Monday nights, having recently expanded to a second motel. The church had a vision to grow the ministry to get more of the church involved.
Teams at the church cooked two meals for two motels for three weeks, before the Travel Inn closed down. They were glad they had already established a second location for the ministry. Two motels were closed in January, eight have been closed in the past year.

“It’s been an emotionally draining time, helping them move out and find other places,” Egbert said.

Following the closure of the Travel Inn, Egbert met with the family who managed the facility and discovered they had nowhere to go. She offered to take the father out to lunch. He was too upset to eat, but let Egbert take his children to lunch. They wanted McDonald’s, so she took them there. While at McDonald’s for lunch after letting the children choose, Egbert encouraged them to get food to-go for later.

As they were leaving McDonald’s, Egbert got a call from a woman who had been displaced and was broken-down in her car. When she and the children stopped to help, there was a sweet exchange when one of the children shared his extra sandwich with the woman.

She knows another motel resident who had paid for her room a month in advance and had to leave the motel when it was closed Jan. 15 without getting any of her money back. She had $12 to live on until Feb. 3.

Not everyone understands why Egbert wants to reach out to the motel residents, and they challenge her on it, saying she is trying to help people who don’t try to help themselves. She comes back with a question.

“Have you ever been in a hole?” she asks.

Egbert lived in Iowa during the farm crisis in the 1980s. They weren’t farmers, but they owned a farm-related business.

“When farms went down, we did too,” she said. “I don’t know how we would have made it through those times without the care and support of our friends.”

Through the three years of ministry at the Travel Inn the church volunteers have seen people obtain apartments and move from the hotel. A couple of Egbert’s friends volunteer at Elevate Branson. This organization helps retirees who can’t survive on their social security income. Some work service jobs, doing laundry, waiting tables, washing dishes. Others are using their gifts, but with little more reward.

“I have good friends who are (musical) performers, and they struggle, too,” Egbert said. “They make about $50 a night.”

Charity and Chris got to know Egbert while living at the Travel Inn. They both struggled with addiction and lost custody of their children for a time. They credit the organization for getting them back on track. They’ve now been drug-free for two years. Charity sings at a church they attend, and Chris drives the church van. A year ago they moved from the motel to an apartment. They hope to move to a two-bedroom apartment soon. Egbert helped the family make the transition from a motel to an apartment by setting them up with some furniture and other homegood basics.  The motel ministry is one in which Branson UMC is reaching out, not bring people in. There is an occasional exception, though. One exception being when a Travel Inn resident started coming to a Bible study at the church, then started attending church and recently was baptized, although she was raised Jewish.

One day someone Egbert described as a “little woman” rang the doorbell at the church. Egbert knew her from previous experiences in homeless ministry. The woman, 72, said her husband had just tried to strangle her, so she left him. She had $3 and her car was out of gas. Egbert took her to a gas station, bought her gas, took her to get food and helped her find another motel for the night.

Egbert is often frustrated at how little she can do to help. The church provides gas vouchers and funds for one night of emergency shelter in a motel. Recently Egbert met a family of four who were living out of their car.

“It’s nothing to have eight people a day stop by the church looking for help,” she said.

When the church volunteers take the meal to the motel, they ask the people if they have prayer requests.

“Let me tell you, they have prayer requests,” Egbert said. She has encountered several people living in motels who know the Bible very well. She likes to reinforce to the people they are helping, that they aren’t that different.

“Some of them feel bad about their choices and how they ended up there, I tell them that we’ve messed up too. We’ve all made mistakes,” Egbert said.

One night at the motel, Egbert’s husband Larry, shared with the group that back in the 1960s he rode a Harley Davidson motorcycle. Not because it was cool or fun, but because it was more dependable and easier on gas than their old car.

“We didn’t have two dimes to rub together back then,” he said.

One day while riding to work on a four-lane highway, an elderly driver changed lanes on top of Larry, sending him and his motorcycling flying through the air at highway speed. Larry was in traction for three months and out of work for a year. At the time of the accident, they had a two-year-old child and Peggy was pregnant. He said they wouldn’t have made it through those times without a tremendous amount of support from friends and neighbors.

Last year Branson UMC did a reverse advent calendar, in which people contributed a food item on each day of advent, ending at Christmas with a box of food. Egbert intended to deliver them to a trailer park with 25 residences, praying that the church would be able to meet the need. They ended up with 90. On January 6, 2020 she delivered them to the Bull Creek trailer park, other nearby residents in need and used the remainder to start a little food pantry in a closet at the motel where they are doing ministry.

“The motel manager said, ‘You can’t believe how this is helping people,’” Egbert said. “A lot of people have a hard time making it to the end of the month without running out of food.”

But not everything is bleak. The city of Branson is far from being on the skids. In addition to the mainstay attractions that have experienced an uptick in attendance last year, there are large scale new attractions under construction, including a Wonderworks science museum, a large aquarium and a water park. However, due to the tourism economy in Branson being seasonal, there are few jobs December through February, and the rest of the year a lot of the jobs are part-time.

Egbert thinks motels were probably overbuilt during the boom time of the early 1990s, then when things dropped off at the end of the decade, several of the smaller independent motels became extended-stay motels.

Although the situation in Branson is unique due to its economic fluctuations and many motels, Egbert knows things are tough all over. She encourages people in other communities to open their eyes to their own neighbors’ struggles and to see the people who are living in the shadows.

“People who are followers of Christ need to realize that these situations are everywhere,” Egbert said.
News