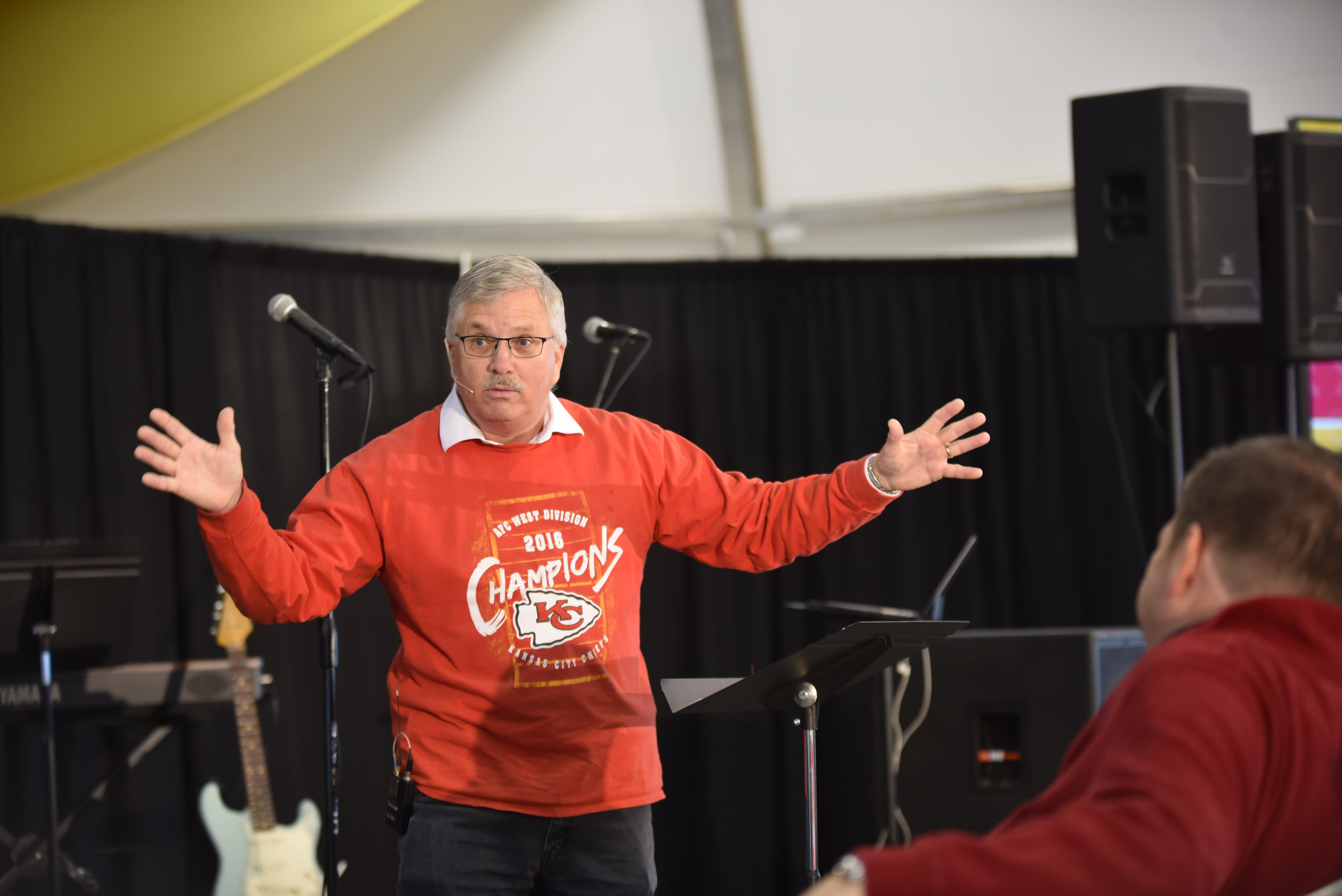 On a Sunday morning in mid-December, precipitation hit Kansas City at precisely the right temperature to turn the highways into a skating rinks. Soon small cars, large semis, and everything in-between were scattered along the shoulders and in the median of Interstate 70 in various states of destruction. Yet many travelers preserved to their destination – Arrowhead Stadium.

Even amidst the worst road condition of this winter, people journeying to be in place for the noon kick-off against the Denver Broncos didn’t have to miss church. Church was there for them, right outside of the south tower. They didn’t even have to freeze in a tent. The structure was temporary, but it was warm and dry, with glass doors that tightly closed out the winter storm.

It was a small crowd, but still a crowd. Missouri Bishop Bob Farr was the preacher for the morning. Staff with Arrowhead Stadium invited United Methodist Church of the Resurrection to become the host for worship services in the Truman Sports Complex parking lot prior to Kansas City Chiefs games. The Chiefs had heard about a series of sermons the Rev. Adam Hamilton, Resurrection’s senior pastor, preached entitled “Faith and Football.”
Last fall the first pregame worship was on Sept. 22 and drew 170 people. The services include music from a Resurrection band, testimony from a Chiefs’ player and a sermon – usually by one of the church’ pastors. “As a church passionate about reaching non-religious and nominally religious people, we see a huge opportunity to connect with football fans who may not have a church family,” Hamilton said.
Bishop Farr began his sermon by pointing toward this passion in his opening statement.

“Church of the Resurrection was created 30 years ago specifically for people who are not part of any church,” he said. Then he read the Christmas story from Matthew.

“God is coming to us, in our brokenness and joys,” he explained.

Each service begins with a video testimonial from a coach or player. On December 15 it was from defensive assistant coach Ron Wilson. Bishop Farr then told how he has been a Chiefs fan since he was a child. When he was pastor at Grace UMC in Lee’s Summit, they used to have a service in parking lot C.

Bishop Farr shared how when he was in Israel the previous week he visited the temple mount. It’s a holy site for three religions, but he saw the distinction of Christianity as being the one who believes God stepped down to us.

“Our faith journey says God is looking for you,” he said. “Christmas is about God pursuing you. He’s pursuing you in your neighborhood.” John chapter 1 says the word was first, even before creation.
The season of Advent is one of waiting and watching. Bishop Farr confessed that he isn’t good at the waiting part. As a boomer who grew up with a microwave, he wants things right now.

“I love watching the Chiefs play for three hours, but I don’t like waiting 20 minutes in line to get in,” he said. “I can sit out on a boat all afternoon staring at the water, but as soon as a put a line in I’m impatient. I want something to happen.”

Bishop Farr referred to Isaiah 34: 19, in which God says he is about to do a new thing, and people should be awake and present for it. He advised we do three things.
The season of Advent is about waiting at the threshold.

“It’s taking the step from the known to the unknown---,” Bishop Farr said. “The scripture reminds us that it is in the in-between times that things happen. A lot of our life is lived in the in-between.”
News