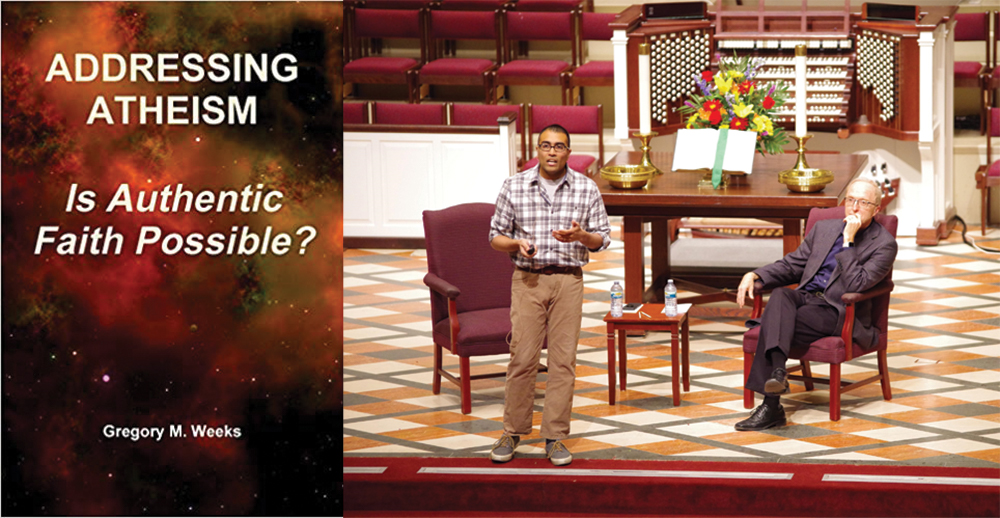 At a time when many United Methodists are struggling with the question of whether they can understand each other and get along, Rev. Greg Weeks has set his focus on reconciling two broader groups – atheist and Christians.

Weeks had already done the heavy lifting of the research and writing required for both sermon series in working on a book he published last fall entitled Addressing Atheism: Is Authentic Faith Possible? In the book he describes his lifelong struggle for “a faith that makes sense and feels right.” The book is “geared to those who are honest with their doubts,” whether they are atheist or Christian.

Weeks believes the root of faith grows best in the soil of honest questioning, and doubt is the great equalizer of humanity. On November 11, 2018 Manchester UMC hosted an event in which Hemant Mehta, a blogger on www.thefriendlyatheist.com website, and Weeks discussed their similarities and differences, as well as modern religious trends. About 200 people attended the event and an additional 4,200 viewers from around the world saw it via Facebook Live.

Mehta, author of I Sold My Soul on EBay and The Young Atheist’s Survival Guide, began by noting the stereotype people often associate with atheists. Instead of being angry and anti-church, he said that many modern atheists are actually open to dialoguing with the religious community. While disagreeing theologically, they find commonality with many of the values and outreach programs of congregations.

One of the facts Mehta presented was the growing number of adults who claim no religious affiliation. In 1972, five percent of the U.S. population understood themselves to be in this category. By 2016, the number of religiously non-affiliated adults had grown to 25 percent.

There are several reasons for this, he noted. They include viewing the church as too “irrelevant, anti-science, sex-negative, exclusive and anti-doubt.” If a congregation seeks to connect with the religiously unaffiliated, it must take these factors into consideration.

Weeks added to Mehta’s point, saying authentic faith must be open to asking questions and not settling for easy answers. Atheism actually poses questions that a believer should confront as well. A Christian should thoughtfully come to terms with issues including the Bible, Jesus, the nature of God and the purpose of the church.

“If we’re serious about reaching a younger generation, we must be open to exploring such issues in new ways, and from different perspectives. Simply saying, ‘You just have to believe,’ doesn’t cut it anymore,” Weeks added.

Weeks concluded by noting areas of commonality between believer and non-believer. From such common ground, the witness of Christ can be better understood. It doesn’t come from arguing with each other, but from genuinely talking to one another.

On November 30 Weeks had a column in the Faith Perspectives space of the St. Louis Post-Dispatch entitled Atheism Is Not a Dirty Word, in which he discussed the event at Manchester and his experience with Mehta. He recalls that after the event, an atheist couple approached him and asked if they could be involved in the church, even though they are atheist. Weeks told them that membership requires an affirmation of faith, but they would be welcome to part of their fellowship, join a study group or participate in mercy and justice ministries.

“Christ would never turn away anyone who had a compassionate heart and an inquisitive mind,” he said. “I hope they will take me up on that invitation. We need to be building bridges between our communities, not erecting walls.”

You can view a video of the 90-minute discussion on Manchester UMC’s Facebook page, under videos. The books of Mehta and Weeks are available on Google Books and Amazon.