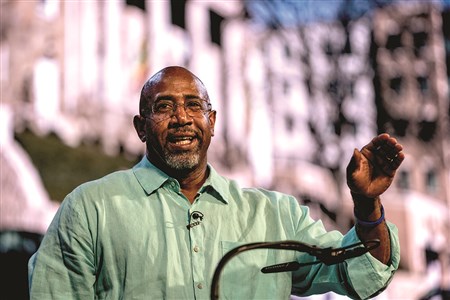 
“You bloom where you are planted.”
That was among the points that the Rev. Joseph Daniels Jr. used to capture the attention of the body during his learning keynote on Friday afternoon.
He recalled one of the things his father told him: “Treat this church like it’s the last church you’ll ever pastor.”
During 27 years at Emory Fellowship United Methodist Church in Washington, D.C., Daniels seems to have taken that advice to heart. He grew the congregation from 55 to more than 400, which would be quite enough to garner distinction.
Yet, his congregation has done more. Much more.
He said that if the United Methodist Church hopes to impact new people, it must understand what Jesus was up to. Salvation is more than a spiritual event. It’s physical, mental, emotional, relational and financial.
People need church today in ways that transcend traditional church expectations. One of the ways Emory Fellowship has done that is to reach out to people who are being displaced in Washington. The city now competes with San Francisco as the most gentrified city in the country.
That means that many working-class people are being priced out of living where they work. In fact, affordable housing is the number one need in Washington.
A white family of four has an average annual income of $120,000, while average annual income for a Latino family of four is $41,000 and $38,000 for a black family of four. The income disparity and high cost of living has direct bearing on the housing crisis.
His congregation responded to that need by working with developers to build 99 units of affordable housing in the neighborhood surrounding the church. Adding up to 300 new residents there helped to boost worship attendance.
Before that project started, the church neighborhood drew drug dealers and users. Property around the church was littered with broken bottles, trash and used syringes. Homeless people slept on the church’s front steps and urinated all around the building. When a member of his congregation urged building a tall fence around the church, Daniels suggested the church open its doors instead.
And open them they did. Street pastors started meeting the homeless under a couple of trees next to the church — serving them soup and the Gospel. The pastor called these people “the least, the last and the lost.”
The church started housing displaced families, first in the church boardroom and then in a nearby boarding house the church bought.
Today, Emory Fellowship has a restaurant that doubles as a culinary training center. A half-court gymnasium that also offers worship for young people. The church features an indoor-outdoor jazz café.
“We thank God for what the Lord is doing!” he exclaimed.
He recommends that other congregations, other churches, can do similar things. First, he said each of us must ask, “What does God have you there for?” Then, congregations must discover what they are truly passionate about.
He cited Emory’s mission strategy as “a divinely inspired plan to build relationships, organize people, utilize assets and liberate congregations for the thriving of communities.”
Congregations must shake off complacency and refuse to be enslaved to the status quo.
“We dared to dream about something more,” he said, “something greater than ourselves.”
The church building needs to be understood as an asset for liberation, not as an object to be worshiped.
Emory Fellowship has been selected as one of the 25 Congregational Resource Centers in the “Strengthening the Black Church for the 21st Century” effort of the United Methodist Church.
As a sought-after speaker, preacher, mentor and author, Daniels is most happy when inspiring and equipping others to see the possibilities God has for them and their communities.
You can view the entirety of Daniels’ presentation at www.vimeo.com/channels/moac19.