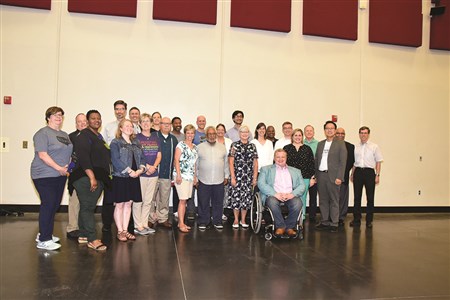 By Fred Koenig and Susan Sneed

It may be a first for Missouri Annual Conference delegation elections: The entire General Conference clergy delegation was elected on one ballot.
In one hour and 15 minutes the Missouri clergy elected its delegates to the 2020 General and Jurisdictional Conferences. On the first round of voting, all six clergy delegates to General Conference were selected: Andy Bryan, Emanuel Cleaver III, Kim Jenne, Matt Miofsky, Sally Haynes and Trista Soendker Nicholson.
On the first ballot of Jurisdictional delegation clergy voting, four delegates were elected: Cody Collier, Nate Berneking, Charity Goodwin, and Lori Lampert.
A motion was made by Kirby Holbrook to suspend voting and select the next two highest vote getters. Speeches against the motion came from Barbara Phifer and Larry Williams. Both cited the critical importance of this election and that every delegate should be selected by vote. The motion failed and on the second ballot the final two delegates were elected: Choongho Kwon and Joel Kidwell.
The first round of voting for the alternate delegates failed to elect any delegates. Linda Gastreich was selected on the next ballot, and again a motion was made to select the next highest candidate. This motion was made by Andy Blacksher. One speech against by Meghan Riegerix who voiced a concern that more centrist and conservative voices were being shut out and there would not be true balance in the delegation without more diverse voices. After a hand vote failed to provide a reliable count, the electronic voters were employed for a vote of 129 for and 225 against, causing the motion to fail.
On the next round of voting, Hank Jenkins was elected to complete the delegations to General and Jurisdictional Conferences.
All of the clergy delegates were from the slate proposed by the MO UMC Next organization, which is committed to eliminating discriminatory language and the restrictions and penalties in the Discipline regarding LGBTQ persons. For more information about MO Next UMC, go to the website www.moumcnext.org.
At the conclusion of the clergy election Missouri Bishop Bob Farr acknowledged the hurt and anger some may be experiencing and encouraged all to support and love each other through this process. He offered a blessing on the delegates as they were formally presented to the clergy.
The laity election, which had occurred a few hours earlier, took a few more ballots than the clergy but had similar results. The laity elected the General Conference delegation in five ballots. On the first ballot Amy Thompson of Woods Chapel (Lee’s Summit) was elected with 400 votes and Ivan James of Asbury (St. Louis) was elected with 287 votes. Jill Wondel of First UMC (Sikeston) was elected on the second ballot. Collette Cummings of Maplewood UMC (St. Louis) was elected on the third ballot. Jon Copeland of Lafayette Park (St. Louis) was elected on the fourth ballot. Steve DeWilde of Central UMC (Kansas City) was elected on the fifth ballot.
For the Jurisdictional delegation Randy Biggerstaff of The Way (Wentzville) was elected on the first ballot. Jon Gray of Centennial (Kansas City) and Margie Briggs of Calhoun UMC were elected on the second ballot. Abby Wimberly of Northern Boulevard UMC (Independence), Joshua Krakos of Webster Groves UMC and Brian Hammons of Schweitzer UMC (Springfield) were elected on the fourth ballot.
Jeff Fothergill made a motion to accept the next two highest vote getters as alternates to jurisdictional conference. This passed by a voice vote, making Larry Fagan of Good Shepherd UMC (Kansas City) and Hannah Shanks of Webster Hills UMC (Webster Groves) the alternate delegates to jurisdictional conference.  Hammons and Fagan, both of whom have been Missouri Conference lay leaders and served on multiple General Conference delegations, were the only ones elected who were not part of the MO Next UMC slate.
This year’s delegation is diverse. The General Conference delegation is 50 percent female, and the Jurisdictional delegation is 43 percent female. It includes eight people of color, two deacons and represents seven of the nine Missouri Conference districts. It includes several people who have been to at least one General or Jurisdictional Conference before as well as new people to the process. And, it includes a span of generations, from Baby Boomers, Gen Xers, Millennials and even two members from Gen Z who are 20 and 23 years old.
Soon after Annual Conference Session Larry Fagan resigned from the delegation. He shared that the reserve delegate position has usually been used as an opportunity to train young people who may have an opportunity to serve on the delegation in the future. He hopes the Missouri Conference can give someone else that opportunity.
“I withdrew to make room for a younger person with a fresh perspective,” Fagan said. “It’s not about us as individuals … it’s about the Kingdom. It’s about offering the love and saving Grace of Jesus to anyone who hasn’t experienced it.  It’s about finding fresh, relevant ways to accomplish the Mission.”
It is unclear at this time what process can be used to replace a reserve delegate who has resigned.